Bi-weekly did not work for this release, updates/rebuilds to systemd/toolchain/util-linux among many other core packages, changed a lot of how the live system started all the needed services. About 25 ISO builds were needed to get all working as before again.

After the October 1st release, many users came with suggestions/requests to add certain applications. Most of these were added over the last weeks. Examples vokoscreen, virtualbox, mkvtoolnix, handbrake. Expect a few more request to be filled soon (engineering applications for one, probably 4-5 of the more well known games too). End goal is around 2000-2200 packages in the repositories, no more.
A full switch to plasma-nm from networkmanager-applet is implemented in this release. Also added to the repo is a very early preview/release of qsystemd, a Qt5/qml GUI frontend for systemd services. 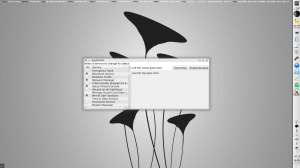 This ISO will be the last of the twice a months snapshot, with the release of KDE 4.11.3 early November, KaOS will go for a public release and be submitted to DistroWatch, from then on expect new releases closely tied to KDE updates (every 4-6 weeks a new ISO, so new users are never faced with a complicated first pacman -Syu). Existing users will always have the latest, no need to reinstall, just update regularly.