KDE 4.11.4 was announced today, with it came some 65 bug fixes. After almost a week in the KaOS build repository, it is now available for all users. This will be the last of KDE 4.11 for KaOS. KDE 4.12 has been tested the last four weeks, and is rock solid, so the next ISO will be released with KDE 4.12 in about two weeks, right around the release announcement of KDE for this major update.

Many test have been run with linux 3.12 too, this is the first kernel that truly works on having hybrid graphics cards supported, without the need for any extra applications. For this reason, expect linux 3.12 to move to stable a bit sooner than the usual 3.xx.7 or 3.xx.8. To have hybrid cards working directly in live mode or new install is too important as to not get the next ISO ready for that. 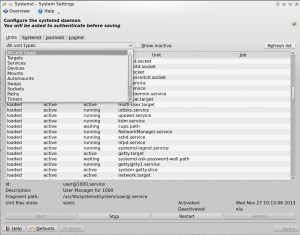 A first fully functional GUI for systemd is in the repositories (and will be part of any install from the next ISO on), kcmsystemd.

Since KaOS has gone more public, the ISOs have been downloaded a good 5000-6000 times, most just took a look and gave suggestions of packages to add to the repositories, examples of what was added last month, fish-shell, smplayer, kdeplasma-applets-stackfolder, dropbox, exiftool, nmap were among the dozens added.

About 900 packages were updated last month, the usual few hundred with any KDE build, and major packages like glib2, mesa, samba, apr, ruby, git, libnl, file, mariadb, hwloc and poppler. Those required the rebuild of many. Expect not only the new KDE 4.11.4 with your next update, another 300 new packages will move to stable too. Calligra 2.8 beta is build for KaOS, and will undergo testing for the next few weeks in the kde-next repository.