To accommodate Linux-users living in the Eastern globe, a full set of Input Method packages (fcitx) were added to the repositories. Among others added are a good amount of python3 packages.

Those addition do not change that the repositories of KaOS are limited. To help users with adding to and maintaining needed packages for their system KaOS Community Packages was opened rather quietly last January. This last month though, a lot more activity has happened in KCP, and the available packages 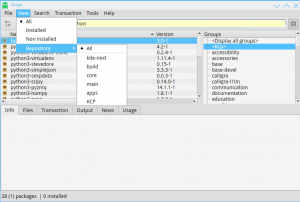 there are well over one hundred.
But it was still a bit of a chore to use.
Thanks to Cellix, this has changed, the application "kcp" was developed and added to the repositories.
With it any user can easily search for any package in KCP with:
kcp -s partial_package_name
Or build and install with:
kcp -i package_name
Octopi was also adjusted for this addition, kcp is fully integrated in octopi. 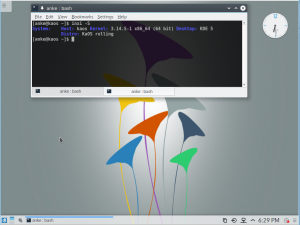 The preparation to move KaOS to the new kde-frameworks/plasma-next has started in earnest too. The kde-next repo is now only used for these packages. Two full builds were done (kf5 beta 2 & 3, plasma-next 4.96.0 & 4.97.0). The results already bring a quite usable system. If development of kf5 continues as is now, expect KaOS to fully switch 2-3 months after KDE declares kf5/plasma-next stable.

The move to kf5 will also hasten the need for a new installer, currently used is fully depending on KDE 4/Qt4, and would need a major rewrite. That still would not eliminate the need for many missing parts (UEFI support, automated partitioning, support for LVM, LUKS to name some).
Transition to a new installer has entered a testing phase. To see this new installer, plus an early test ISO with kf5, a kf5/plasma-next video is up.

More exciting news is underway for a possible brand new installer, there is a start of cooperation between KaOS and a few other distributions to come to one universal, Qt5 based installer.