KaOS is proud to present the 2015.11 ISO.
The policy is, once a first pacman -Syu becomes a major update, it is time for a new ISO so new users are not faced with a difficult first update. With new builds effecting over half of the KaOS repositories (currently at about 2100), that new ISO is more than due.

Artwork received several updates. The all new logo is implemented over various parts of the system.
A fully scalable slideshow with SVG based images and QML based text was designed for the installer, replacing the old png based slides. 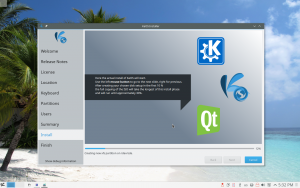 KaOS specific settings for SDDM, kwin and kinit make it possible to start a Plasma Wayland session right from the login manager. An X11 session is of course still default, but the drop-down menu has a wayland entry too. The default web-browser Qupzilla is one of the first applications that heavily relied on X11 in its code that is fully ported to run a Wayland session too.

Calamares, the used installer framework, has moved to the 2.0 series. Highlights of the changes and additions: