Two weeks into the New Year, KaOS is pleased to present you with a first ISO for 2014. The policy is, once a first pacman -Syu becomes a major update, it is time for a new ISO so new users are not faced with a difficult first update. Since the last ISO, updates to a good 700 packages happened, including some major groups, so a new ISO is now needed. 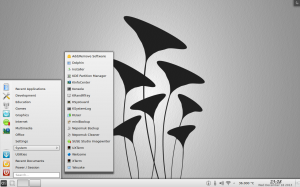 Among the updates, you will find KDE 4.12.1, new mkinitcpio and kmod. LLVM, ilmbase and openexr, libwebp all had a .so update, meaning all those that depend on them were rebuild. Another large group is the new xorg stack, with xorg 1.15, mesa 10.0.2. New options were added to this group including dri3proto, libxshmfence and presentproto.

Visually the biggest change for this ISO is the move to homerun-kicker. Plus Octopi has moved to Qt5 and has the option added to show file listing for all packages, not just installed.

For further info about the ISO please see the release notes and the Download page.